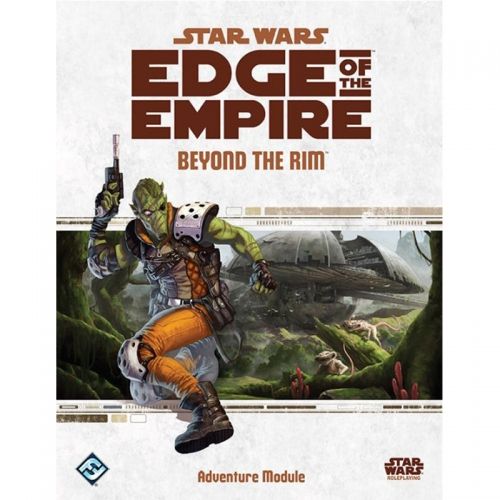 STAR WARS EDGE OF THE EMPIRE- BEYOND THE RIM - ADVENTURE MODULE

A long time ago in a galaxy far, far away...

Decades-old secrets from the Clone Wars resurface aboard a bustling space station. The unexpected discovery of a direlict message pod gives new life to an old smugglers story about a long-lost Separatist treasure ship, the Sa Nalaor. The wreck supposedly lies at the edge of Wild Space, waiting to be found by those brave or crazy enough to look...

Fire up your hyperdrive and embark on a journey to the farthest regions of the Star Wars galaxy. Interpid explorers, scrappy smugglers, and adventuresome academics must harness every skill in their arsenal to evade Imperial forces, thwart their competition, and finally explore - and survive - an uncharted world.

- An epic tale of exploration perfect for starting characters.

- Mini-gazetteers for the Wheel space station, Cholganna, and Raxus Prime, enabling Game Masters to use these locations in their own campaigns.